Mission of the groups

Since the Fukushima nuclear accident, safety evaluations of nuclear power plants become more important than ever before. Safety Analysis Group & Fukushima Analysis Project Group are jointly carrying out safety evaluations of nuclear power plants through analysis work. These simulation capabilities of the group are also applied to the areas other than nuclear energy, for example, evaluation of solar light collecting systems, etc.

The Institute of Applied Energy (IAE) owns the codes listed in the table below. In addition to analysis and evaluation work using these codes, IAE is developing new codes based on such technologies. The codes are built from mechanistic models that precisely describe physical phenomena. Also, the codes are able to simulate the physical phenomena of the obtained analysis results more in detail. In particular, the severe accident analysis code SAMPSON has been introduced in various benchmark analysis projects by the Organisation for Economic Co-operation and Development (OECD) and its analysis capability has been proved as one of the best analysis codes currently used in the world.

Analysis and evaluation of the accident event progression behavior at Fukushima Daiichi NPS are underway as a national project. As an example, the analysis results of the accident progression at Unit 1 by SAMPSON code are shown in Fig. 1. Pressure reduction in the reactor core was caused by the vapor blowing from the core to the containment vessel, through ruptured in-core instrumentation tube. Water injection by fire engines into the reactor began about eight hours after the damage of bottom of the reactor vessel due to core meltdown. These facts can be learned from the analyses.

Fig. 2: Result of analysis on accident progression at Unit 1 of Fukushima Daiichi NPS

2.Analysis on pipe wall corrosion (subsidized by METI and entrusted by the Nuclear and Industrial Safety Agency, FY2005 to 2012)

In August 2004, the secondary system piping of Unit 3 of Mihama Power Station ruptured during normal operation, leading to an accident of five workers’ demise. The cause was pipe wall thinning due to corrosion. In the wake of this accident, the group has developed an analysis code for pipe wall corrosion. Fig. 2 shows a comparison between the analysis and the actually measured values on pipe wall thinning phenomenon due to corrosion. Relation between the flow accelerated corrosion (FAC) and the quality of cooling water were identified.。

Fig. 3: Analysis of pipe wall thinning due to FAC

3.Evaluation of solar light collecting systems (entrusted by the Ministry of the Environment, FY2010 to 2012)

太The group has also developed an analysis code for simulation of tracking light beams in the solar light collecting systems. Fig. 3 shows a simulation that light beams are reflected from many mirrors installed on the ground to the top of tower. 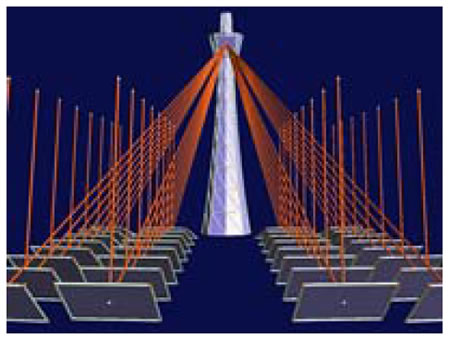 Implementation of safety analysis, research and study in response to needs

In addition to the above, the group has conducted surveys on the trends of water quality management in nuclear power plants, worldwide. In the areas other than nuclear energy, under request from private companies, the group has implemented thermohydraulic analysis of water-vapor two-phase flow and surveys on the trends of two-phase flow analysis technique and others, etc.。